The first cultivar of Alnus maritima (seaside alder) has been selected and named.

‘September Sun’ is a rapidly growing member of the subspecies oklahomensis. It has a multi-stemmed habit and forms a dense canopy of dark-green leaves that can become orange-brown in the autumn. Clusters of yellow flowers hang from branches in September. 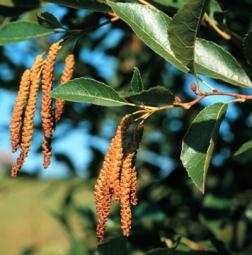 ‘September Sun’ is very tolerant of flooding, performs well on low-nutrient soils, prefers full sun, and is hardy in USDA zones 3b to 7b. It is best to plant ‘September Sun’ where soils are consistently moist or wet, but periodic droughts are tolerated.

Alnus maritima subspecies oklahomensis ‘September Sun’ was officially registered at the Brooklyn Botanic Garden on March 28, 2003, and US Patent # PP18,101 was issued on 10/02/2007 (Inventors: William R. Graves and James A. Schrader).

For information on how to obtain plants, please contact Bill Graves at: graves@iastate.edu.