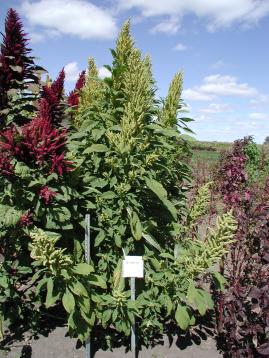 The African Vegetable type is popular in West Africa. The traditional examples have black seeds; this version has white seeds which are more appealing as food since the seeds cook-up into a white porridge.  Having white seeds makes this line suitable for use both as a vegetable, and for edible seed (grain) production.

Grain amaranth is a potential crop for West Africa since it can improve the nutrition of people that have enough calories, but lack complete protein with all the amino acids.  Amaranth grain has an excellent protein quality, similar to eggs.  Therefore amaranth grain is complementary with other crops such as cassava, maize, or taro that yield plentiful calories, but have deficiencies in amino acids.

This amaranth has the traditional African vegetable plant-form with branching along the stem and it is all-green with no spots of red.  The source germplasm is an African Vegetable Type amaranth (PI 490662) which came from Benin. The line began as an off-type with white seeds, selected in 2004 from among plants with black seeds.  Since the plant form is traditional it may be easier to adopt as a vegetable and grain crop than other grain amaranths. 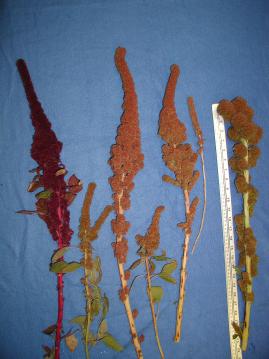 ISURF is pleased to announce that two varieties of ornamental amaranth, “Pillar Orange” and “Pillar Red”, are now being released for licensing.

The lack of seed shedding is due to the use of a rare trait: non-shattering seed-holding cases that lack an abscission zone at their equators and therefore remain closed, holding the seeds inside. The inflorescence is denser than any existing commercial amaranths. The density makes the inflorescence sturdier than other amaranths and tends to discourage insect hiding in the inflorescence by comparison with existing commercial amaranths. The seeds are white and non-dormant so it seldom volunteers as a weed in the following growth season.

The flower colors were compared with a Royal Horticultural Society chart, and “Pillar Orange” matched best with the GREYED-ORANGE Group N172 B. “Pillar Red” red matched best with RED Group 53A. The colors are expected to be more intense if grown in a cooler climate due to the pigment intensifying effects of cool temperatures and bright light. The orange variety is especially well suited to harvest season decorative color schemes.

The plants are 170 cm tall with an inflorescence 75 cm long in the Ames, Iowa field nursery location. If the central inflorescence is removed, smaller, 45 cm long secondary inflorescences emerge as side shoots that are of a length well suited to routine use by florists. These observations are based on rows three feet apart and plants 4 inches apart in the rows. It seems reasonable that closer spacing would dwarf the plants.

The flowers are mature from late August to mid October from direct field seeding during the first week of June. Due to the sturdiness of the inflorescence and plants, the harvest season extends about four to six weeks. The performance of transplants started early in the greenhouse, and taken to the field was not tested. Experience with amaranths grown in winter short-day length greenhouse environments suggests that plants would mature about three months after planting and grow approximately 30 cm tall.

These two ornamental varieties are from Iowa State University plant breeding based on two amaranth varieties provided by others. David D. Baltensperger and others released the grain variety 'Plainsman'; Peter Kulakow donated an accession of 'Elephant Head'. The new varieties are derived from their work. 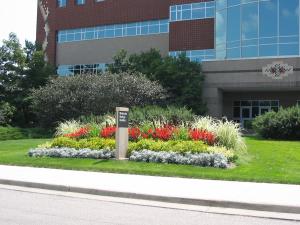 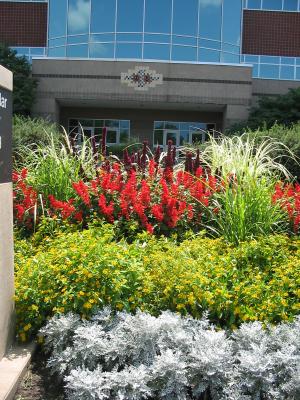 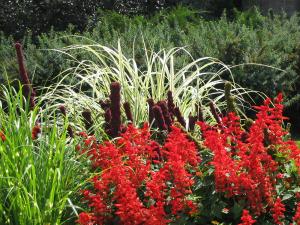 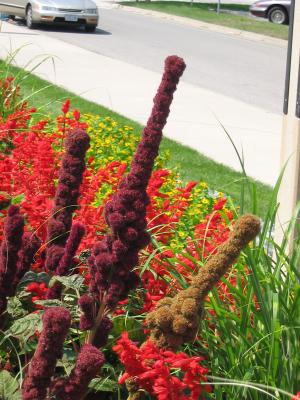 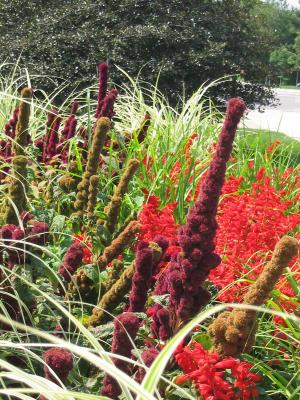 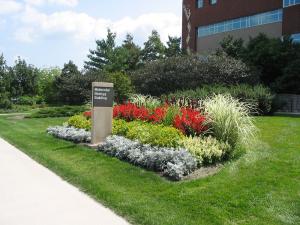 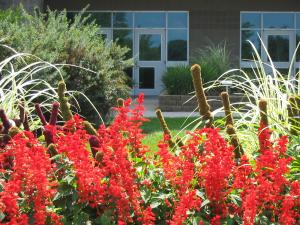 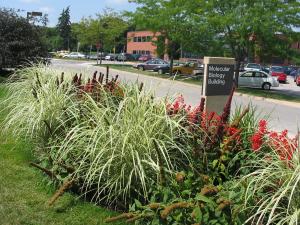 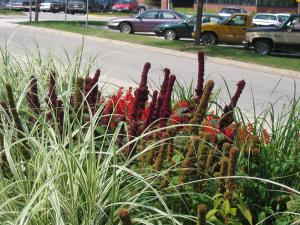 Go directly to the Purdue site, click on #3 and there are links to two Amaranth papers in pdf format.

Iowa State University has developed two amaranth populations for use by plant breeders seeking the non-shattering trait. The populations DB 92226 and DB 9350 have little or no abscission at the equator of the utricle, or beneath the utricle. They are intended to reduce grain shattering via crossing with standard cultivars. Shattering can cause serious losses in commercial grain production. Utilization of these populations in your own crossing program may ultimately produce far superior commercial varieties by reducing this loss and increasing the value of your lines.

200 seed packets are available for a shipping and handling charge of $5.00 for the first packet and $2.00 for each additional packet. Payment must be received and an agreement must be signed with the Iowa State University Research Foundation prior to seed shipment. There is a limit of 3 packets per population. Watch for future amaranth releases from Iowa State University!

If you have any questions regarding the ordering procedure of these new populations, contact the Iowa State University Research Foundation at germplasm@iastate.edu.