The scene is set. World War I is over, Herbert Hoover is president, prohibition is in effect, Charles Lindbergh has become the first man to fly solo nonstop across the Atlantic Ocean, the Model A car is new on the market, the Baird Televisor had just become the first working television system, penicillin is discovered...

...and somewhere in Rockford Illinois a high school boy received an assignment from his Spanish teacher.Get a pen pal from Spain.

That's how Griffith Buck's story as a nationally known rose hybridizer began.You see, young "Griff" dutifully paid his quarter to the YMCA to get a pen pal, but none of the contacts sent a reply.Eventually he found another name in a library book of a Spanish rose nurseryman, Pedro Dot, and he tried again.

Dot received the letter but passed the correspondence duties on to his niece. He would have Maria Antonia include notes and tips on rose growing. He told Buck how to hybridize roses and urged him to give it a try. The seed was planted for a friendship that would span three generations with the Dot family.Buck eventually named a rose for his mentor Pedro Dot - "El Catala" honors the Catalonian.

Buck finished high school in 1932 after which he returned to his birthplace and attended post work at the Cincinnati school where he obtained a teacher training certificate.He was not allowed to teach until 1937 when he turned 21, but then taught in Appanoose county for 5 years.

In 1942 he entered the military and served in the U.S. Army, 13th Airborne.While there he first taught illiterate recruits, later trained as a paratrooper, and eventually saw action in the European theater during the Second World War. 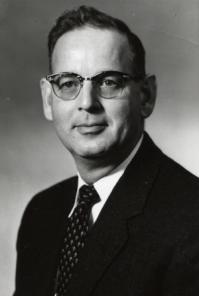 After his discharge from the military in December of 1945, he entered Iowa State College in January of 1946.There he enrolled in the horticulture program.Buck received his BS degree in June of 1948, MS in December of 1949, and Ph.D. in March of 1953 having studied horticulture and microbiology.Buck became an assistant professor after getting his Ph.D., but did not become a full professor until 1974.

During his time at ISC he met and married his wife, Ruby Costello.They had two daughters, Susan and Mary, who would also go on to be teachers.

Now for a little history lesson: Neils Hanson, who went both to Iowa State and South Dakota State, went all over the world early in the century looking for hardy plant stock.One thing he brought back with him from a trip to Siberia was Rosa laxa Semipalatinsk.This stock was eventually used in Manitoba, Canada by Frank Skinner and Will Godfrey for producing new roses.In 1949, Dr. Skinner persuaded Buck to use this stock in his own work because not only was it very winter hardy, but it was also a repeat bloomer.

Griff took the stock, and the challenge, to work with Rosa laxa though it had barely been used in breeding up until that time.After 3 or 4 years, Buck realized his first hybrids were taking several years to set on blooms and the difference from the original Rosa laxa was fairly insignificant.In his work, Buck noted that since many characteristics don't even develop until maturity, it could take 3 to 5 years for each test plant to mature and in some cases even bloom for the first time.Often the resulting plants were not worth the wait but still required years of study before being discarded.

At this point he called upon another world famous rose breeder, this time from Germany, Wilhelm Kordes.

He wrote to Kordes explaining what he was trying to do, how his results were less than promising, and asked what was he doing wrong.Kordes replied that the only problem was he had the wrong seed parent.He sent Buck a sweetbrier hybrid, 'Josef Rothmund'.

The first year it bloomed, Buck only got five seeds out of the 'Josef Rothmund' 'Rosa laxa' cross.All five germinated.Four were white like the 'Rosa laxa', but the fifth was the color of 'Josef Rothmund' with only 5 petals.It was this parent that Buck began to cross with garden roses.

During this time he was doing research and hybridizing roses and geraniums on a shoestring budget.There was simply no money for spraying for disease so his program took a logical turn to developing disease resistant varieties.In reality the idea of disease resistant or hardy roses was a radical concept.Up until this time, serious rose growers had to exhibit great skill in order to make their roses survive and thrive.Constant attention had to be paid to their care and upkeep.Buck was about to change all that.

From a speech Buck made in 1985, he explained, "While I didn't start to develop roses that were disease resistant, I had inherently selected for disease resistance by the manner in which I made the selections in the field.My normal procedure was to grow the seedlings in the greenhouse one year until they got big enough, and plant them out the second spring.The only attention they would get would be water and cultivation.I didn't spray for disease.If they couldn't hold on to their foliage, they wouldn't properly mature, and therefore they wouldn't overwinter well.In a sense I was selecting for those that could hold on to their foliage in spite of becoming infected with foliage diseases." 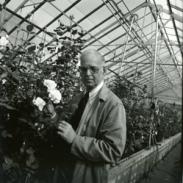 One of Buck's early successes was Applejack."It happened like this.I was out in the garden one humid summer morning.It was perfect weather for the release of foliage fragrance from sweetbrier roses.I noticed that the foliage of one particular seedling was very apple scented.It just so happened that this seedling was also in full bloom at the time and the combination of the clove scent of the flowers and the apple scent of the foliage proved too much for me.It was so overwhelming that it drove me out of the garden.The seedling rose that drove me out of the garden that morning I named 'Applejack'."

While Buck was now having success in his crosses, there were still some obstacles to overcome.One trait of these new varieties was an extremely largesize.Many plants were averaging 10 to 12 feet tall and 12 to 15 feet across.This was clearly too big for the average rose enthusiast so he began to turn his focus to smaller plants.

The first rose Buck named having a smaller plant size than Applejack was Wanderin' Wind."In spite of its smaller stature, two plants at my home have grown to be 15 feet tall.The reason I don't cut them back is because of the robin who nests in them every year."

Buck was extremely generous with his roses, frequently giving them away and rarely getting patents on them. Ironically, Buck's work developed into an allergy to roses and he had to take allergy shots for 30 years.

Griffith Buck was a researcher and professor of horticulture at ISU from 1948 to 1985 where he hybridized not only nearly 90 rose varieties, but also 15 varieties of geraniums and a heliotrope.During this time his reputation grew as a widely recognized rose hybridizer and respected member of the rose growing community.

Buck retired at the age of 70, and soon after his breeding stock was destroyed.Many of his varieties survived because of the Bucks personal collection and many of the friends given these plants offered cuttings back.They were then collected at the Minnesota Arboretum where they were carefully tested and cataloged

Today, collections of the Buck Roses can also be seen at the Iowa Arboretum (Luther, IA), Reiman Gardens (Ames, IA), Bentonsport Gardens (Bentonsport, IA) and Elko County Rose Garden (Elko, Nevada).There are over 60 industry sources where the Buck Roses may be purchased including nurseries in the US, Canada, England, New Zealand, Denmark, Norway, and India. Griffith Buck passed away March 28, 1991 at the age of 75, but he left a legacy of beauty through his roses few of us can hope to match.

Dr. Griffith Buck on the naming of his roses:

Allamand-Ho!"Is taken from a square dance term.Since I don't square dance, I get my terms from a friend who does."

Aunt Honey- "the man that got me started on this rose breeding program at Iowa state had a wife who's name was Helen.Her little nieces couldn't say Aunt Helen, so I called a rose like they called their aunt, namely, "Aunt Honey'"

Countryman -"was named because it gave me another idea on how to use these plants.This rose made me realize that you could use my roses in combination with other pants like the English do in their country gardens.It happened purely by accident.I had a bed of roses on campus where all the roses died except for 'Countryman'.Since I had no roses for replacements and did not want to abandon the bed, I kept the plants of 'Countryman' and added Chinese Forget-me-nots, and French Marigolds.The result was spectacular."

Distant Drums - "has artistic coloring and powerful fragrance.Since I can smell it six inches away, I don't sneeze."

Dorcas - "was a television reporter on our college television station.Every noon she would have an interview program.Since I enjoyed being on her program I named a rose for her.Notice how Dorcas has freckles?"

Golden Unicorn - "was my division as a paratrooper"

Kissin� Cousin- the first of the hybrid tea types

Les Sjulin- "I names one rose for a friend who was there for me everytiome I got a little discourages.'Les Sjulin', is a beautifully formed, two-toned pink Grandiflora."

Paraglider - "This last year I named about 4 dozen roses.With this many it becomes difficult to think of new names.During World War II, I was a paratrooper.Paraglide is the title for the specialty magazine for paratroopers.'Paraglider' became the name for another rose."

Pearlie Mae- is named for Pearl Bailey because I enjoyed her television program so much.Originally I was going to use her name for a Geranium that I bred but the introducer decided to go with a series name and color.'Pearlie Mae' geranium became 'Sunbelt Scarlet'.

Pippa's Song - "My secretary has a daughter who was born with a very severe heart condition.The doctors predicted she would never live beyond her third birthday.Last year she graduated from high school even though she's very restricted in what she can do .I named the rose Pippa's Song for her.Pippa said that it was the best graduation present she could have."

Prairie Sunset - changes color as it opens and finishes red so I gave it an appropriate name.

Princess Verona - "the quality of the flowers caused me to name yet another pink rose, 'Princess Verona'.It's a seedling of Prairie Princess and a floribunda called "Verona'."

Queen Bee -" a friend of mine was the garden editor for Better Homes and Gardens for many years.She also wrote a gardening column in the Des Moines Sunday Register.She told me that she would not let anyone name a rose for her because she didn't want to hear; Fleeta has a weak neck, Fleeta blackspots, Fleeta wilts, Fleeta fades.Since she was called the queen bee of garden writers, I took my cue and called this rose 'Queen Bee'."

Sevilliana - "commemorates the music and dancing of Seville, Spain"